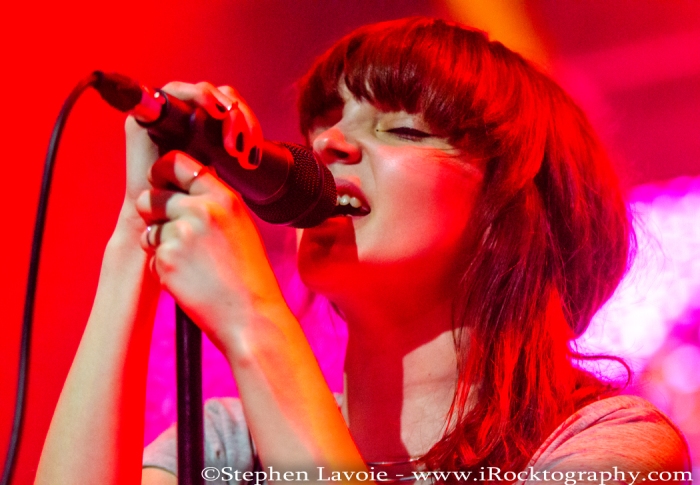 Preparing for the pre-show meet and greet, the photographers shifted into the usual hurried pace, over 100 people stood waiting for hours to meet the band. It was a pleasant surprise when Lauren, said no need to rush, we want to meet everyone. Meet and greets, for many musical artists, are typically seen as a media tasks which often changes the atmosphere of the event when compared to their on-stage presence.

Notorious for being quickly executed with everything rushed, the band may appear to be uncaring or insincere. Move the line faster, get them in and out, just a quick photo or an autograph you can’t have both, it’ll take too long, not much casual chit chat. Not so with this band, lucky fans were treated with warm greeting, the band signed anything and everything that was offered, gave plenty of hugs and took pictures. Some fans brought gifts, artwork and even custom cupcakes. Very nice… 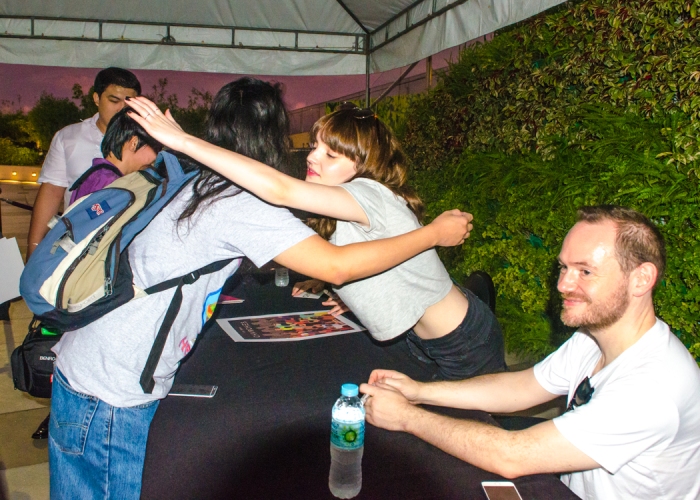 This personalized touch is reflected in their on-line media presence, unlike many bands, this trio makes it a point to personally write everything on their Facebook and Twitter accounts, a rarity in this day and age. 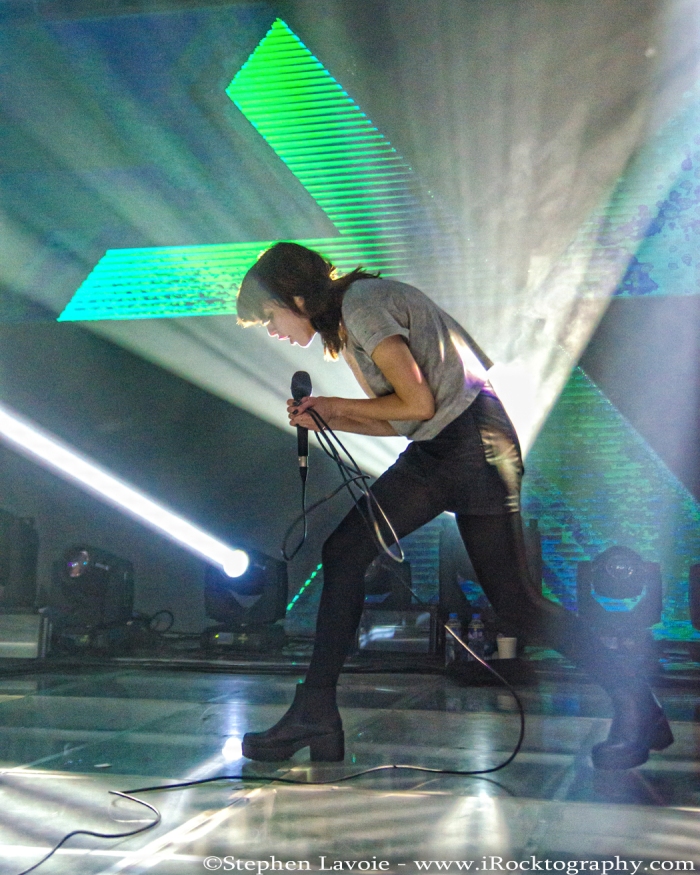 Recently quoted in the Guardian ‘You see so many bands regress and become like children, getting told what to do,” rails Lauren Mayberry, “I’m not in the business of telling people ‘DIY or die’ but I do think it’s important to be as hands-on with what you’re doing as possible. Sometimes if you don’t take the easy option it’ll pay dividends in the long run.” 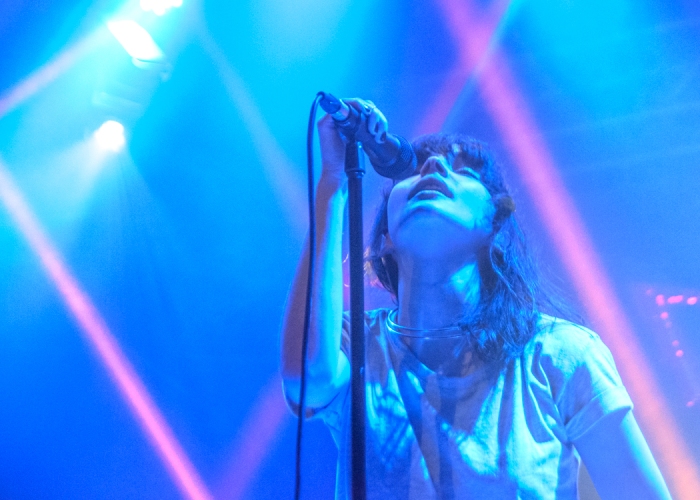 “It’s really important to us that we handle social-media stuff personally. It’s good when a lot of people write to us privately, and we can write back to them… That’s important. If you wrote something to a band, when you were young, and they wrote back, it would have really meant something to you, wouldn’t it? And if you see any funny pictures of cats on our Twitter—if you see that, it’s me.” 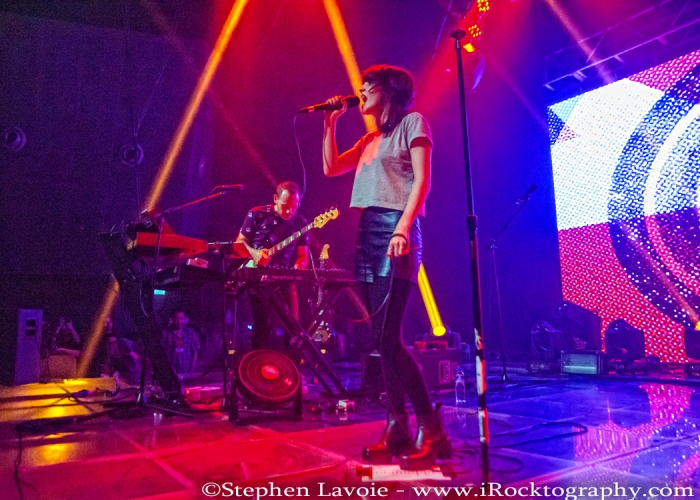 As you would probably guess they are quoted as being heavily influenced by 80s pop, big fans of Cyndi Lauper, Kate Bush, and The Cocteau Twins.

They’ve had great success in a short period of time and it’s not usual for them to play for large crowds, in a recent US tour they played to almost 20,000 over 18 shows, so Samsung Hall was an intimate treat for the nearly sold out crowd. 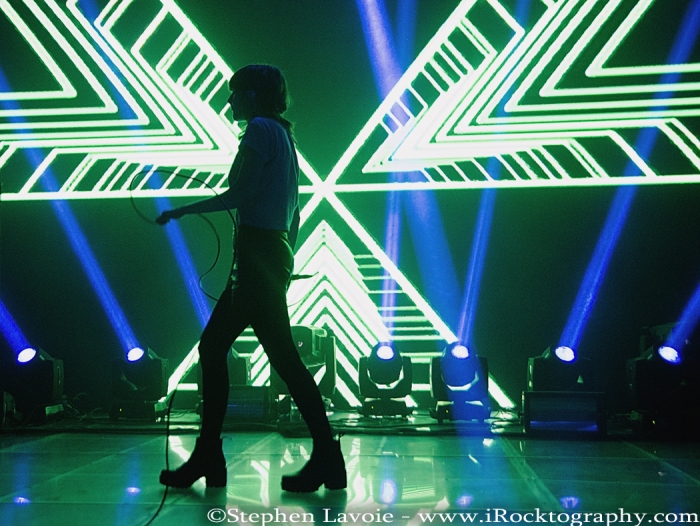 The trio built on their hype by touring relentlessly through 2012, with headlining and festival gigs mixed in with high-profile support slots with like-minded bands like Passion Pit, Depeche Mode, and School of Seven Bells.

Quality sound at this venue really allowed Laurens vocals to shine, if you closed your eyes you would think your listening to a record, perfect on all accounts, not an easy task for any seasoned performer, never mind for a relatively young group.

On stage Lauren is at the mic stand centre, flanked by Cook and Doherty with the keyboard and synthesiser appartus appearing to be more of a sci-fi control panel. At times during vocal breaks she would move towards the back of the stage, with a dancing style of a whirling-durbish, whipping the mic cord all over the place. The band were getting into it just as much as the crowd.

Lighting was nothing much to write home about, many bursts, with patterns timed to the music and some interesting shape effects on video backdrop. A dance inducing set up, perfect for that moody look but a challenge photographically. Although sometimes refreshing to see a greater focus on the audio rather than the visual. 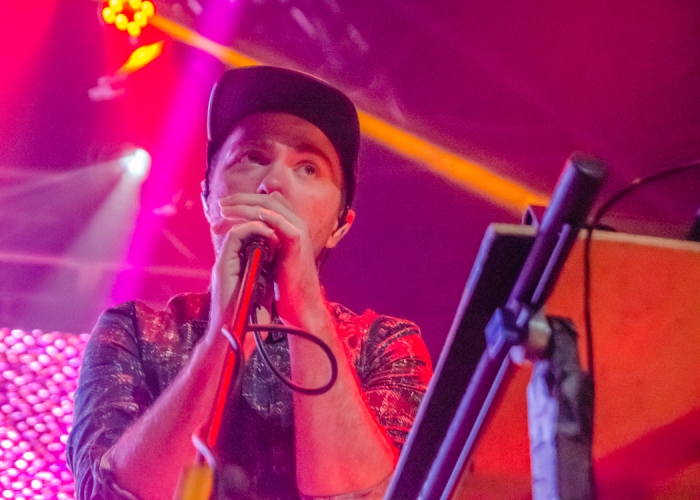 As you would probably guess by listening to their music, Chvrches are heavily influenced by a lot ’80s pop, and they’ve mentioned in interviews that they’re big fans of Cyndi Lauper, Kate Bush, and The Cocteau Twins.

The setlist was basically most of the selections from their debut album, “The Bones of What You Believe,” which was released on 20 September 2013, the crowd went wild when the played their biggest hit, “the Mother we Share”. 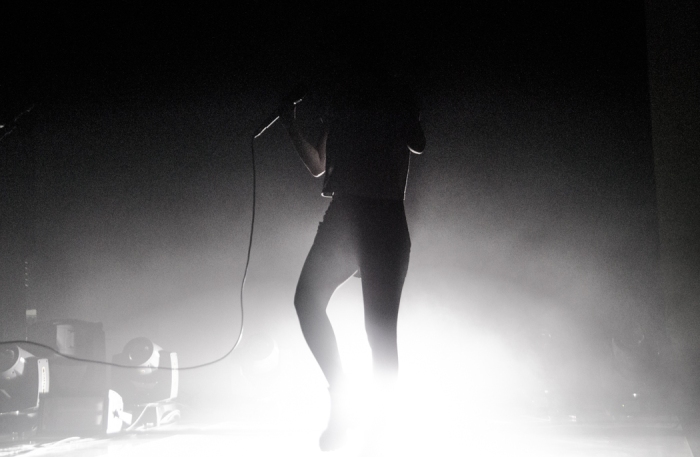 They performed well, started a little late, no surprise there, if you every get a chance to see them live, Lauren’s impeccable vocal performance will be worth the trip.

Special thanks going out to Vybe Productions, a solid event, nice work as usual…

2 thoughts on “Chvrches, a personal touch…”