Yumi who? Certainly not a household name, for the uninitiated a brief history may be in order. The band name is pronounced as it appears, “You-me Zoo-mah”. 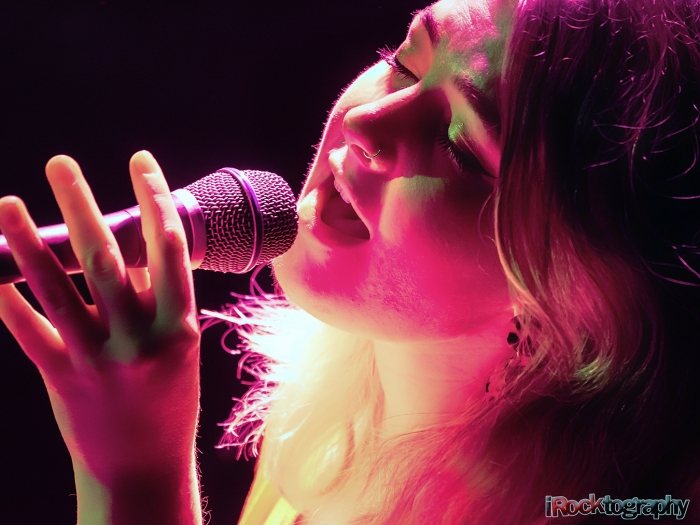 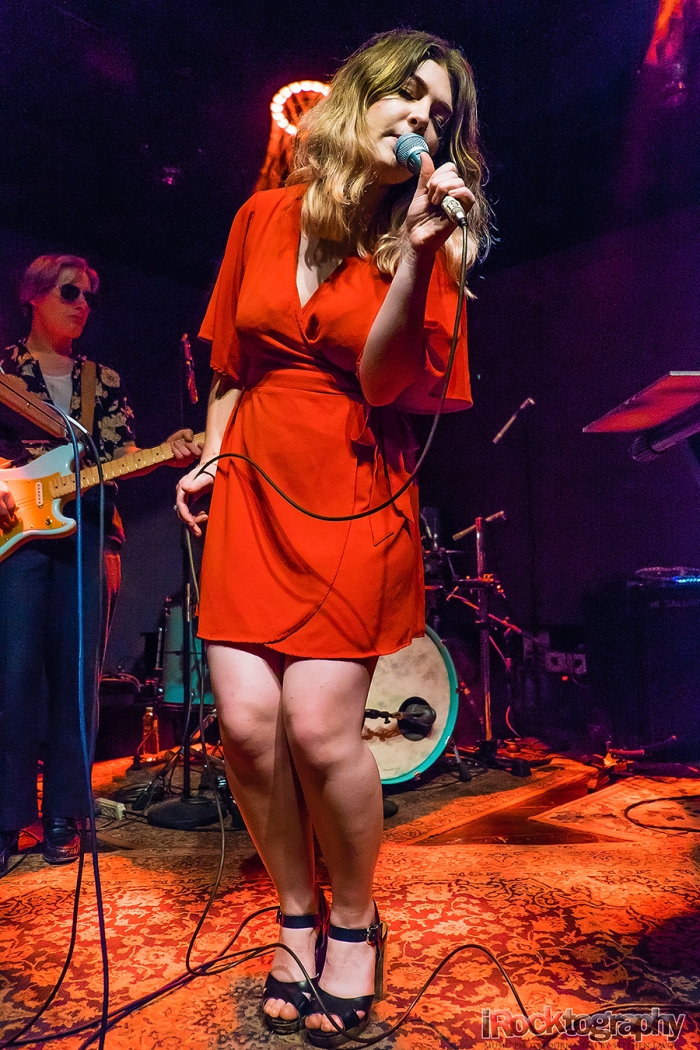 The group met each other as friends, where they used to share a house together in Christchurch, NewZealand. Then taking a cue from a devastating earthquake there in 2011, the members scattered to various parts of the globe, now stationed between living in Christchurch, New York, and Paris. When not on tour, maintaining a collaborated connection through cyberspace file-sharing, where much of today’s digital music now flows.

Perhaps their sound falls somewhere in the category described as a dream, electro, synth or indie-pop, their music more of a chillaxed, retro shoe-gaze feel to it. Check out Depths (Pt 1) or Barricade for an idea of their sonic property. Willowbankis the sophomore album which was recorded over the Christmas season last year, a homecoming of sorts as they regrouped in Christchurch. “Us, Together” may be my favorite track off that one, they released their debut album Yoncalla in 2016 so relatively prolific for  any band at any stage of development. As far as resume performances, Lorde hand-selected them to support her arena tour of New Zealand, a high compliment in itself. 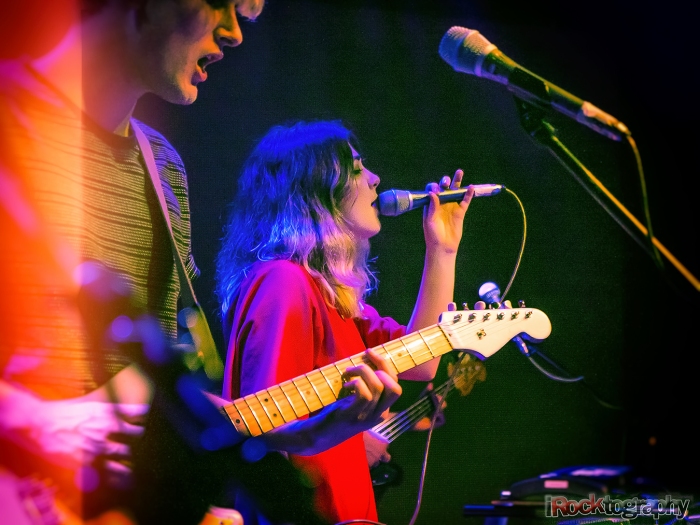 The mood in the room was subdued yet expectant as the band rather skillfully performed last Thursday night at 19 East, in a fashion you don’t see often. In most cases, band members perform on a specific instrument for the entire show but these guys are multi-instrumentalists, which isn’t unusual for many musicians. However, during a live show, most bands avoid switching from a guitar to a bass guitar, to keyboards synthesizers while utilizing a looping machine. Other than Christie at center stage on vocals and synth with Olivia at the drum kit, the concert was more like a game of musical chairs.

It was a show worth experiencing. One those events that steadily percolates with thoughtfully written lyrics and a dreamy layered sound that had the crowd memorized for the entire night. Christie Simpson on vocals with Sam Perry, Charlie Ryder and Josh Burgess also on vocals yet all of them rotating positions, Olivia Campion the touring musician, competently rounding out the evening on drums. 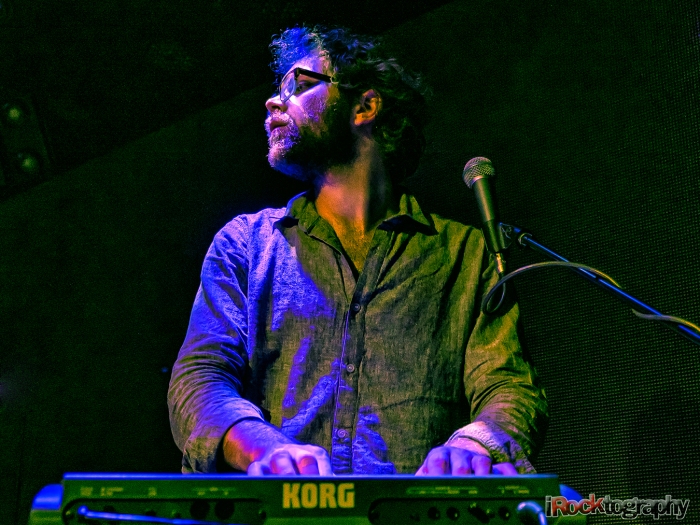 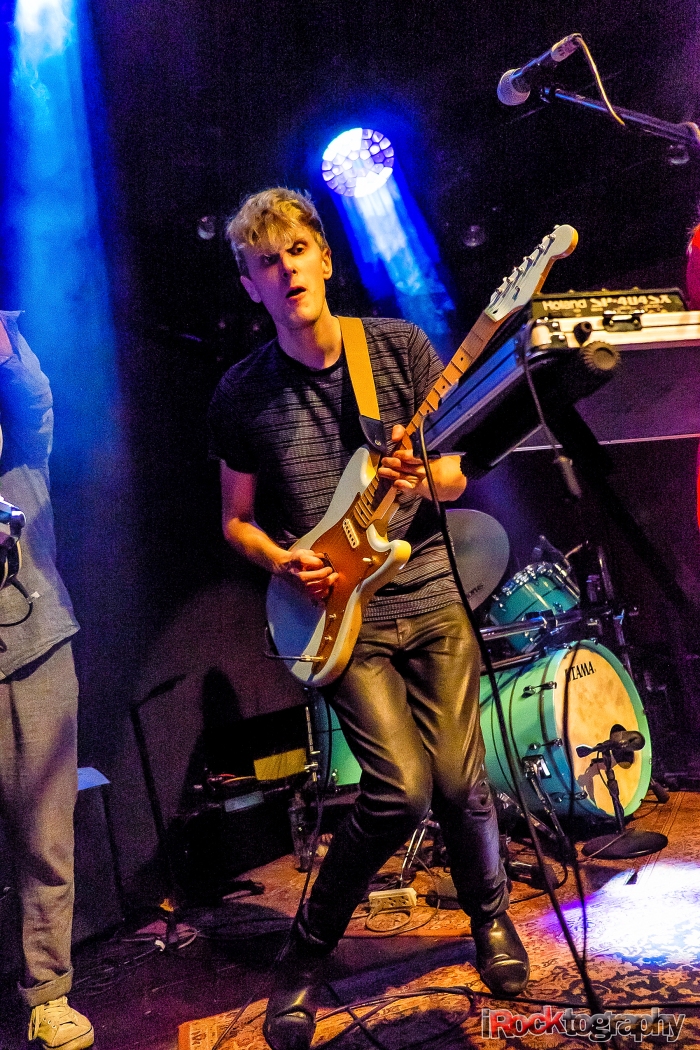 Christie’s soothing vocal quality swayed in perfect rhythm of the sound with a setlist that flowed smoothly from one track to another like warm butter. Not much banter in-between songs as they transitioned from tracks briefly introducing the title or album information, basically letting the music do the talking. 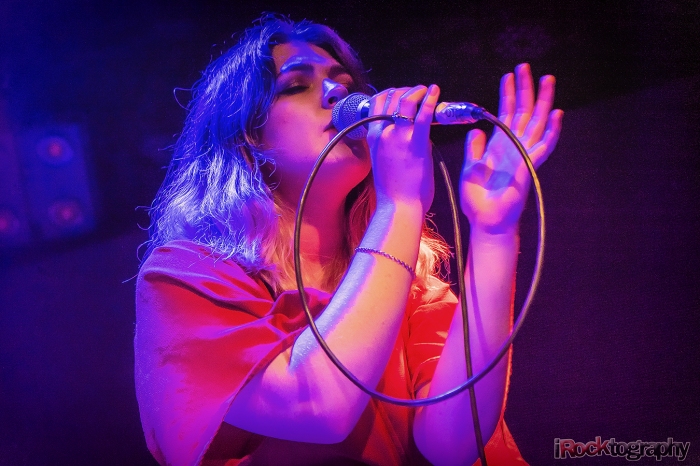 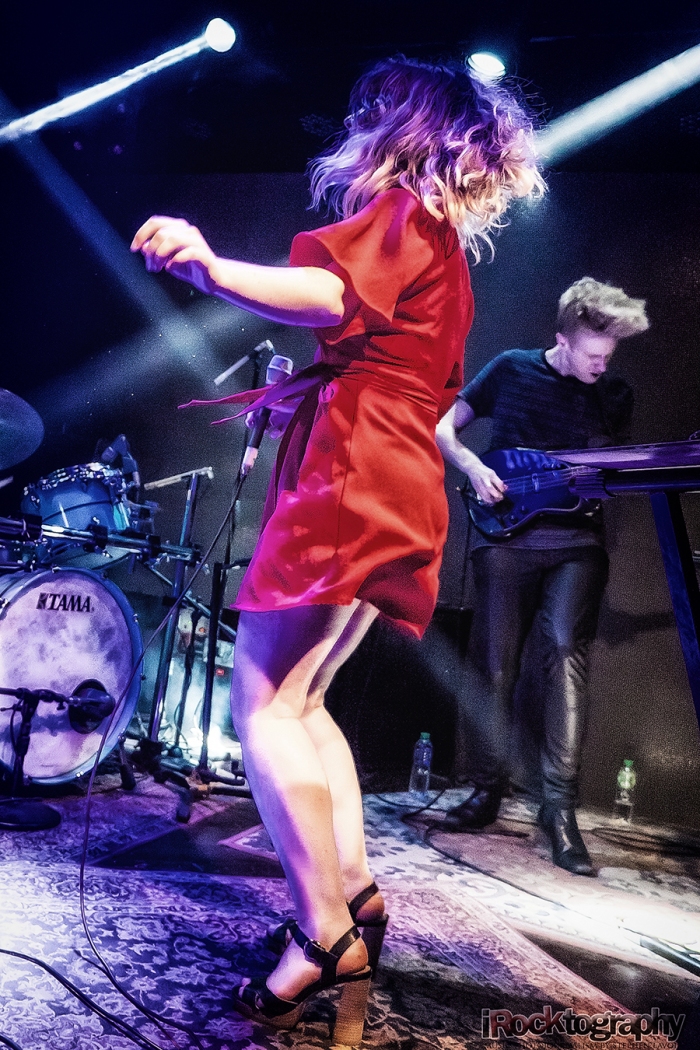 Consequently, Charlie may be seen around France these days, Josh might be walking the streets of NYC, but between them and Sam, you weren’t sure where they would be on-stage or what instrument they would be playing next. It was fun to watch and they made it all look relatively easy. There’s a reason why most musicians don’t change things up like this, it’s difficult and can be confusing. With a synthesizer keyboard table at each mic stand, it can quickly become a technical nightmare with a spiderweb of cords crisscrossing the floor in all directions. Not only that, if all the performers aren’t in perfect sync, especially when using a looping machine, the pleasing layers can morph into an aggravating jumbled mess. For music with multiple layers, studio work can be managed but live it’s a whole different ball game, there are no second chances. 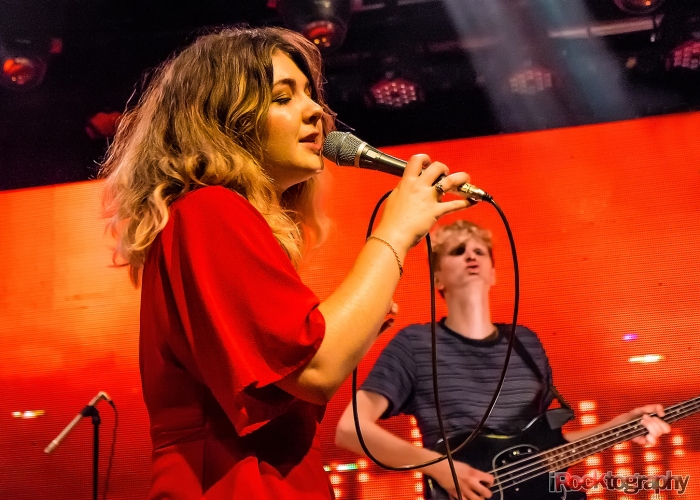 Impressively, they didn’t noticeably miss a beat and kept everything on track. They all knew where and when they were supposed to be at just the right moments. Combine that technical wizardry with this venues high-quality sound system, arguably one of the best in Metro Manila,  and the result is an almost spiritual listening experience for all in attendance. While gracefully negotiating the cramped stage, they exuded a steady blissful sound that provided and airy dance climate with an almost R&B groove to it. This group is one of those bands where the musicians are totally in sync. And not just what you hear with your ears but at multiple levels, something beyond a physical realm. Instinctually, it appears they blended their musical souls to be functioning as one. 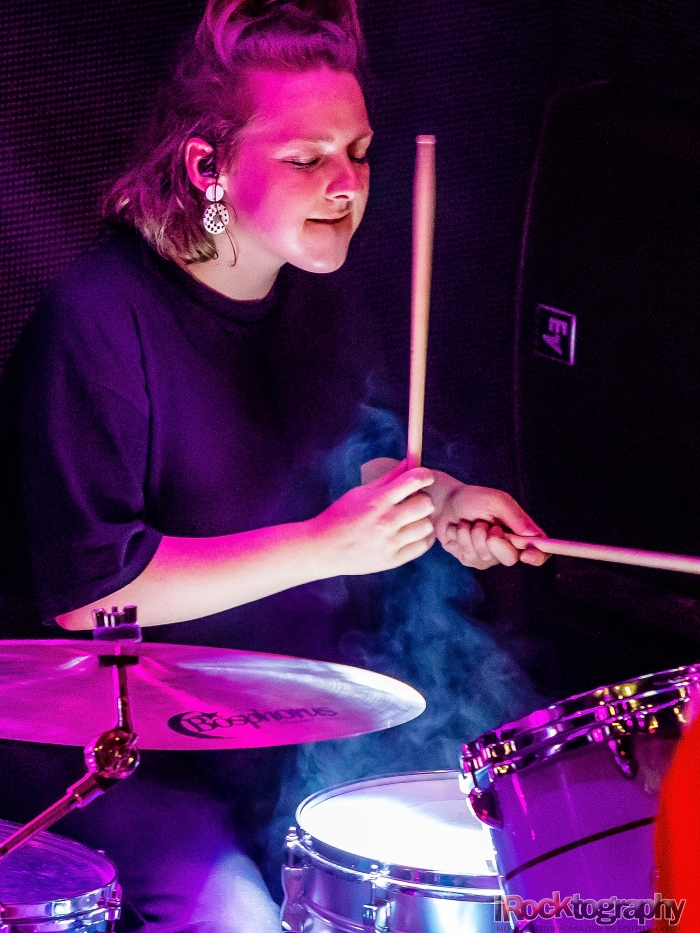 Much of the crowd arrived early to catch local legends, Up Dharma Down, of course, they performed well. I’ve covered them multiple times now and I have yet to experience a sub-par performance from them at any time. Consistent with a capital C, which says a great deal about their level of professionalism. 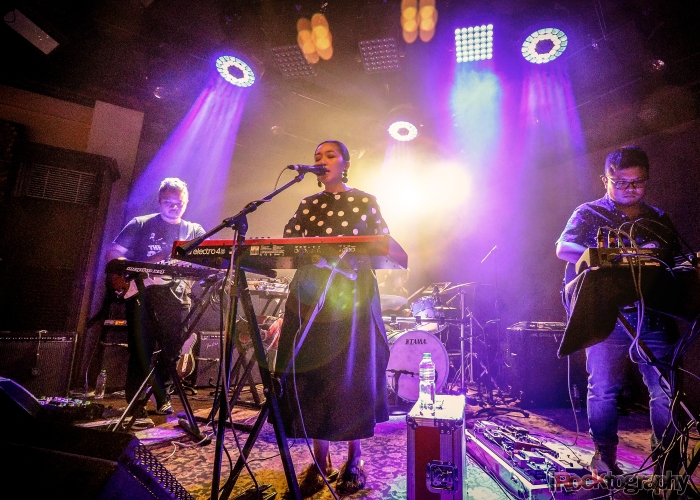 Then UDD departed the stage and the members of Yumi Zouma began setting up their equipment. There’s only a lean or none existent road crew when you’re a new band so you set up your own equipment and the audience paid attention while they did so. Patiently subdued, almost becoming onlookers to a behind the scenes occurrence. Before taking the stage the band did a quick huddle with some unheard words, then quickly found their positions, with the crowd energetically applauding. They ended the show on an upbeat note with Charlie jumping into the crowd on the bass. 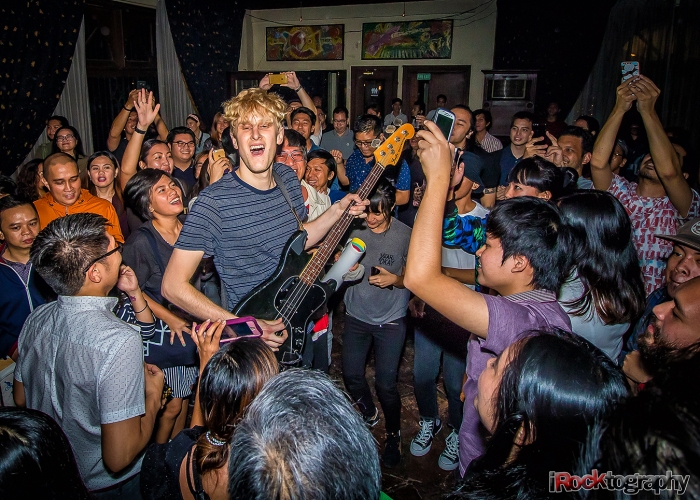 I was fortunate to briefly meet the band before the concert, they are friendly and approachable, with down-to-earth attitudes. After the show, they cordially hung out with the crowd taking selfies and signing LPs and various merch. It was refreshing to see such admiration from numerous folks and the band members taking the time to genuinely focus on the moment to establish a relationship with their true fans.

Yumi Zouma is one of those groups to keep an eye on. They have an ability to convey authentic emotion through an easy-going dialect. I was impressed with their skilled technique while adjusting volumes within the layered sound of a live show. Always something special to experience a group of musicians really functioning as one, after all, isn’t that what a band should be. Performing with a silent line of communication on an unconscious level; something you couldn’t see but you knew was there none-the-less, like electricity. 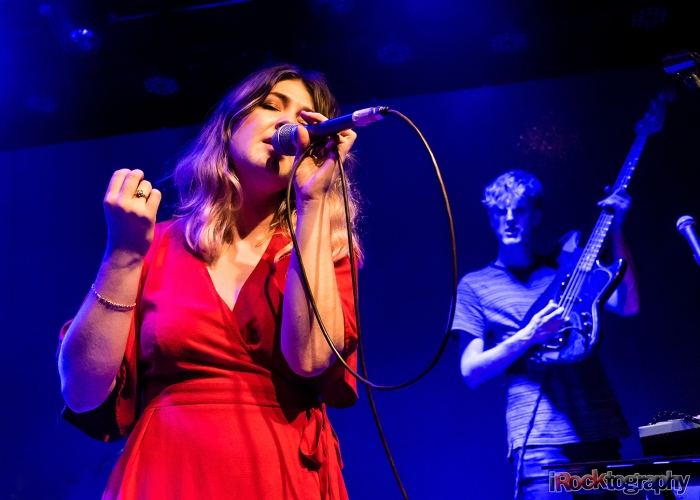 Big thanks going out to Terno Recordings for bringing another top quality act to the Philippines.

Setlist:Depths (Pt1)
Keep it Close To Me
Song for Zoe & Gwen
Us, Together
Barricade
Perse Phone
Other People
In Blue
Carnation
The Brae
Yesterday
December
Salka Gets Her Hopes Up
Encore: Alena